About 16 years ago, we had an unforgettable vacation in Belize. We’ve always had it on the list of places to come back to and this year we finally got round to it. We decided to go with the same outfit, Island Expeditions out of Pemberton BC.

This was to be an 8-day adventure, called “Epic Belize” on the website. “Action-packed” would best describe it. Within those few days we

….and during our downtime did some power-birdwatching, took a drumming lesson, and visited a remote Mayan village where we met and had lunch with family and friends of our guides.

Our guides. Yes, we should start this trip log with our Mayan guides – Valencio and Pedro. Valencio was our main guide throughout the trip. Pedro was our lead guide on the river. These guys gave it all. Both were great company and a constant source of fascinating information. We must have exhausted them with questions. They made the trip for us. No question.

Day 1 we go from Toronto > Atlanta > Belize City > Dangriga. Dangriga is a town in the Stann Creek District in the Southern part of the country, the main centre of the Garafuna people. The town itself has little to recommend it and our lodgings for the night at the Bonefish Hotel was, shall we say, adequate. The main point of being in Dangriga was that is served as a launching point for the first leg of our adventure at Glovers Reef.

Except the “launching” got off to an inauspicious start. Our skiff, armed with no less than three Johnson 200 outboard motors, got stuck on a sandbar at the mouth of the estuary from which we disembarked. All able-bodied men were called upon to jump overboard and assist in the work of dislodging the trapped craft – ‘able-bodied’ becoming a term more loosely defined as more clients were obliged to get out of the boat with each successive failure to free ourselves from the mire. After a lot of heave-ho-ing the boat was eventually coaxed over the barrier. We gringos helped I suppose, perhaps not so much with the in heave-ho-ing as the removal of our combined ballast from the stricken vessel.

Anyway, amid much laughter and wise-cracking, we got back in the boat (with varying degrees of dignity) and set out on the extremely bumpy ride to Glovers Reef.

Glovers is a wonderful site. Located on an Atoll about 20 miles from the mainland. Basic amenities. Safari tents. A nice dining room. All located in a paradise of palms, sand and turquoise sea. We did some snorkeling, kayaking, kayak-sailing, tried out some inflatable SUPs.

Denise and I like to paddle. And good as the snorkeling was, afternoon of day 2 we elected to split off from the rest of the group for a nice long paddle along the reef edge. Cynthia, another member of our group, came with us.

On our second evening, we got a demo of traditional Garifuna drumming from one of the guides (“Budge”), assisted by other staff members. Some of us also got a chance to play the segunda (bass drum) while Budge did his thing with the Primera (lead drum). Cool.

Day 3 and we’re back in the skiff and on our way to Bocawina.

Bocawina is a completely different form of paradise. The soft and lush jungle stood in marked contrast to the sand and salt of Glovers. And the birds! Now, we are casual birders. But we are introduced to Blasio. Blasio is not casual anything. Blasio has us out at 5:45AM, coffee in hand, giving us the play-by-play of the local birdlife with his laser pointer like a 1960’s radio commentator. Even the most jaded cosmopolitans in the group are enraptured. This guy was good. 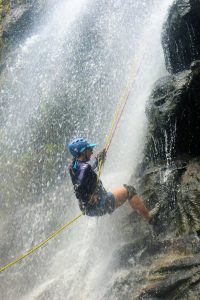 After breakfast, a trek up the mountain to a marvelous swimming hole at the base of a waterfall. Then rappelling down said waterfall. Then some zip-lining. (Once again – the guides were terrific. Safety conscious but lots of fun at the same time). All told, Bocawina was a great spot. The rappelling and zp-ling were great sport but to me, it felt a bit like Disneyland for grown-ups. The restaurant and accommodations were excellent. It was nice to indulge for a bit. But really, I was looking forward to getting on the river.

Next day, a LONG haul to the Moho River. Lots of chatter in the van to pass the time. We stopped at Pedro’s house to pick up gear (and say hi to his family). Lunch was laid out by one of the local villagers. Then down to the river.

We were using inflatable “kayaks” – sort of a hybrid between a raft, kayak (long, narrow and kayak sitting position) and canoe (tandem, open top and single blade paddle). Following the usual commotion as gear got sorted out, pfd’s and helmets fitted, sunscreen applied, etc. we got on the water and started to get used to the boats. And then, straight into the big stuff! The river’s topography is such that we paddled over 20 drops in the first day. Including an 18-footer. We swam the first couple but once we got a bit more used to the boat, managed to stay right-side-up most of the rest of the time. It was a thoroughly thrilling ride. So much so that I had to stop and look back every so often and remind myself just how beautiful this river was. 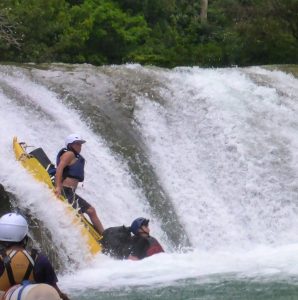 Camp 1 was in an idyllic spot at the base of a set of falls. No bugs! It almost felt wrong to be walking around in short sleeves unprotected. Early next morning we were awakened by the spine-chilling roar of howler monkeys. We scrambled out of the tent and managed to spot a group high in the trees.

Packed up and on the river for another day of white water. Lunch at the top of a waterfall that afterwards had to be paddled solo. Denise was persuaded to take our boat over. I simply tossed my paddle, jumped off the ledge into the deep pool at the bottom and got back in the boat there. It was that kind of day. 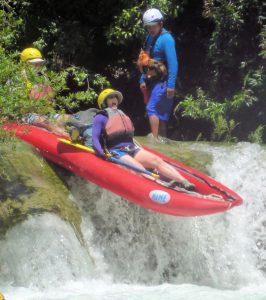 Camp 2, also beautifully situated. That evening, Pedro cooked some chicken, although that doesn’t begin to do justice to the culinary miracle we witnessed. He got a fire going. We off to cut down some cohune palm; spread out the woody stalks as a grill; seared the meat; and then laid the rest of the palm leaves on top and let it slow-cook for about an hour. Best chicken ever. It didn’t hurt I suppose, that these chickens were probably running around his farmyard until shortly before our arrival. 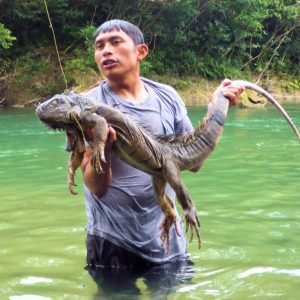 Last day on the river was more of a gentle paddle. A chance to spot some birds and bond with an iguana or two. Pedro pointed to loose branches high up in the overhanging trees. Incredibly, this was the river’s high-water mark in the wet season. Eventually gaps began to appear in the bush and signs of human habitation began to re-appear. Finally, a concrete causeway intruded on the landscape to mark the end of an unforgettable adventure.